Our team and what we do

Solita has a lot of security minded professionals working in various roles. We have a wide range of security know-how from threat assessment and secure software development to penetration testing. The Cloud Security team is mostly focused on performing security testing on web applications, various APIs, operating systems and infrastructure.

We understand that developing secure software is hard and do not wish to point fingers at the ones who have made mistakes, as it is not an easy task to keep software free of nasty bugs.

You’re welcome to contact us if you feel that you are in need of software security consultation or security testing.

Nonetheless, we’ve managed to find a handful of vulnerabilities from various open source products and as responsible, ethical hackers, we’ve informed the vendors and their software security teams about the issues.

The vulnerabilities found include e.g. Cross-Site Scripting (XSS), information disclosure and a payment bypass in one CMS plugin. But we’ll keep the focus of this blog post in the XSS vulnerabilities since these have been the most common.

What is an XSS vulnerability

All of the following vulnerabilities have been fixed by the vendors and updated software versions are available.

Apache Airflow is an open-source workflow management platform, that is being used by hundreds of companies such as Adobe, HBO, Palo Alto Networks, Quora, Reddit, Spotify, Tesla and Tinder. During one of our security testing assignments, we found that it was possible to trigger a stored XSS in the chart pages.

There are a lot of things you can configure and set in the Apache Airflow, usually, we try to input injections in every place we can test and have some random text to be identified on which part was manipulated with a payload so we can later figure out which is the root cause of the injection.

In the Apache Airflow we found out that one error page did not properly construct the error messages on some misconfiguration cases, this causes the error message to trigger JavaScript. Interestingly in another place, the error message was constructed correctly and the payload did not trigger there, this just shows how hard it is to identify every endpoint where functionalities happen. Changing your name to XSS payload does not usually trigger the most common places where you can see your name such as profile and posts, but you should always look for other uncommon places you can visit. These uncommon places are not usually as well validated for input just due to a simple fact of being less used and not even that well-remembered they exist.

Grafana is an open-source platform for monitoring and observation. It is used by thousands of companies globally, including PayPal, eBay, Solita, and our customers. During one of our security testing assignments, we found that it was possible to trigger a stored XSS via the annotation popup functionality.

The product sports all sorts of dashboards and graphs for visualizing the data. One feature of the graphs is the ability to include annotations for the viewing pleasure of other users.

While playing around with some basic content injection payloads, we noticed that it was possible to inject HTML tags into the annotations. These tags would then render when the annotation was viewed. One such tag was the image tag “<img>”, which can be used for running JavaScript via event handlers such as “onerror”. Unfortunately for us, the system had some kind of filtering in place and our malicious JavaScript payloads did not make it.

While inspecting the page DOM and source of the page, looking for a way to bypass the filtering, I noticed that AngularJS templates were in use as there were references to ‘ng-app’ mentioned. Knowing that naive use of AngularJS could lead to a so-called client-side template injection, I decided to try out a simple payload with a calculus operation in it ‘{{ 7 * 191 }}’. To my surprise, the payload got triggered and the annotation had the value of the calculation present, 1337!

A mere calculator was not sufficient though and I wanted to pop that tasty alert window with this newly found injection. There used to be a protective expression sandbox mechanism in AngularJS, but they probably grew tired of the never-ending cat and mouse play and sandbox escapes that hackers were coming up with, so they removed the sandbox in version 1.6 altogether. And as such providing a payload ‘{{constructor.constructor(‘alert(1)’)()}}’ did just the trick and at this point, I decided to write a report for the Grafana security team. 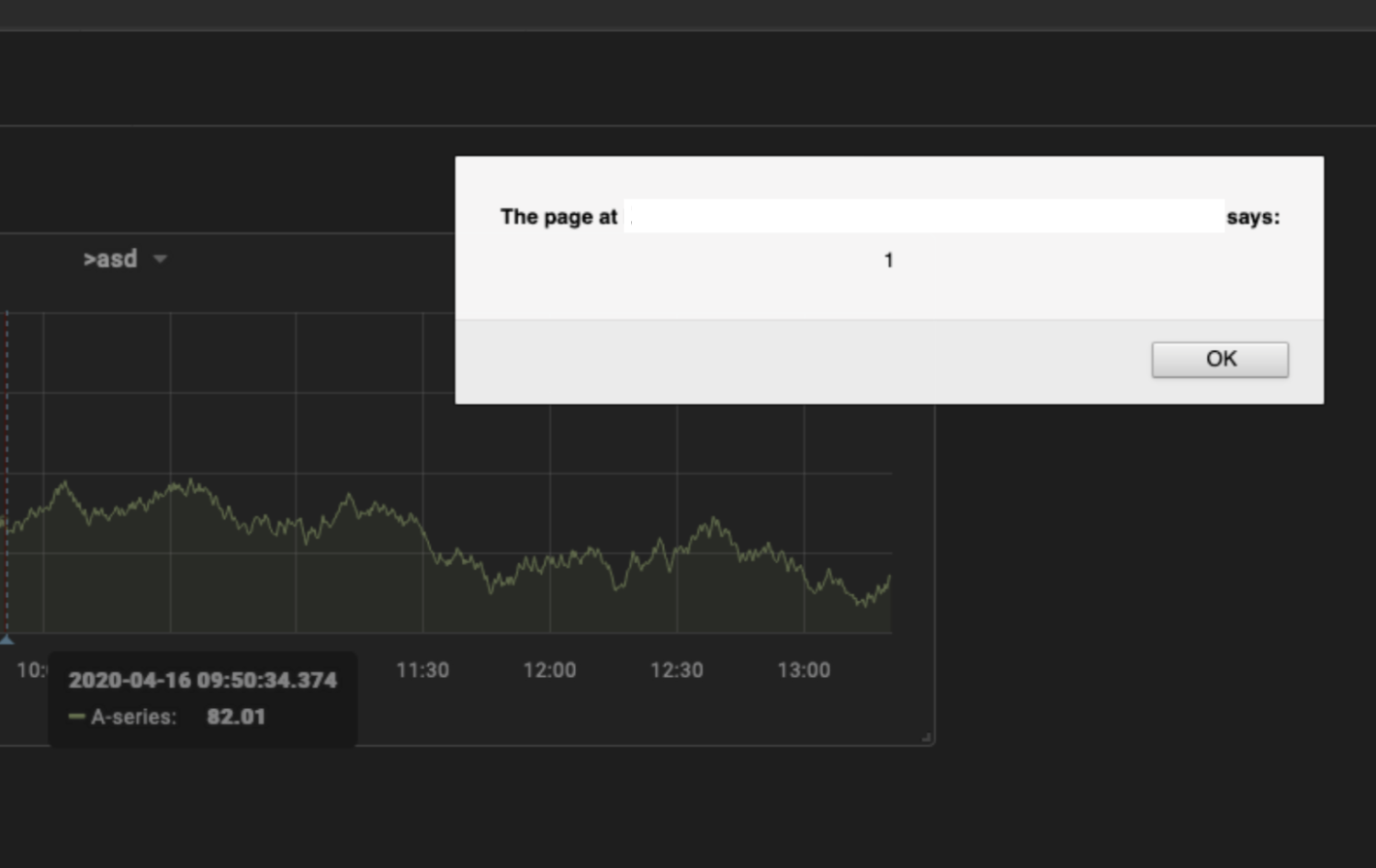 16.04.2020 – The vulnerability was found and reported to the security team at Grafana

Graylog is an open-source log management platform that is used by hundreds of companies including LinkedIn, Tieto, SAP, Lockheed Martin, and Solita. During one of our security assignments, we were able to find 2 stored XSS vulnerabilities.

During this assessment we had to dig deep in the documentations of Graylog to see what kinds of things were doable in the UI and how to properly make the magic happen. At one point we found out that it’s possible to generate links from the data Graylog receives and this is a classic way to gain XSS by injecting a payload such as ‘javascript:alert(1)’ in the ‘href’ attribute. This, however, requires the user to interact with the generated link by clicking it, but this still executes the JavaScript and does not make the effect of the execution any less dangerous.

Mika went through Graylog’s documentation and found out about a feature which allowed one to construct links from the data sources, but couldn’t figure out right away how to generate the data to be able to construct this link. He told me about the link construction and told about his gut feeling that there would most likely be an XSS vector in there. After a brief moment of tinkering with the data creation Mika decided to take a small coffee break, mostly because doughnuts were served. During this break I managed to find a way to generate the links correctly and trigger the vulnerability, thus finding a stored XSS in Graylog. 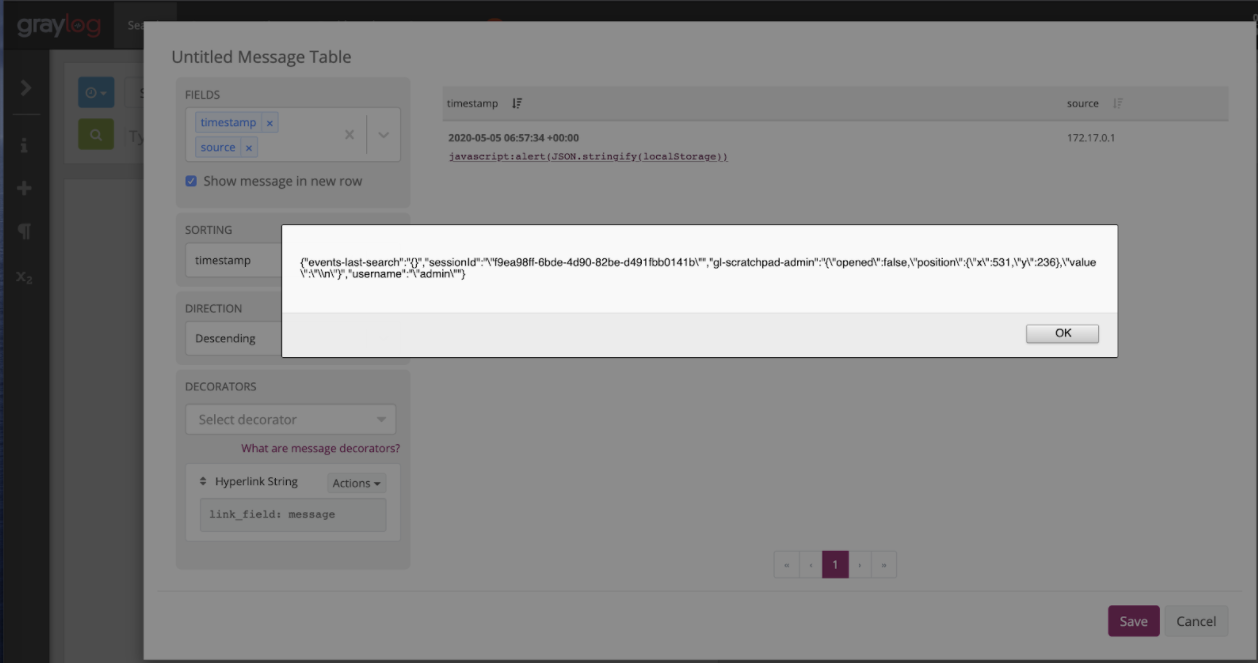 Graylog also supports content packs and the UI provides a convenient way to install third-party content by importing a JSON file. The content pack developer can provide useful information in the JSON such as the name, description, vendor, and URL amongst other things. That last attribute played as a hint of what’s coming, would there be a possibility to generate a link from that URL attribute?

Below you can see a snippet of the JSON that was crafted for testing the attack vector. 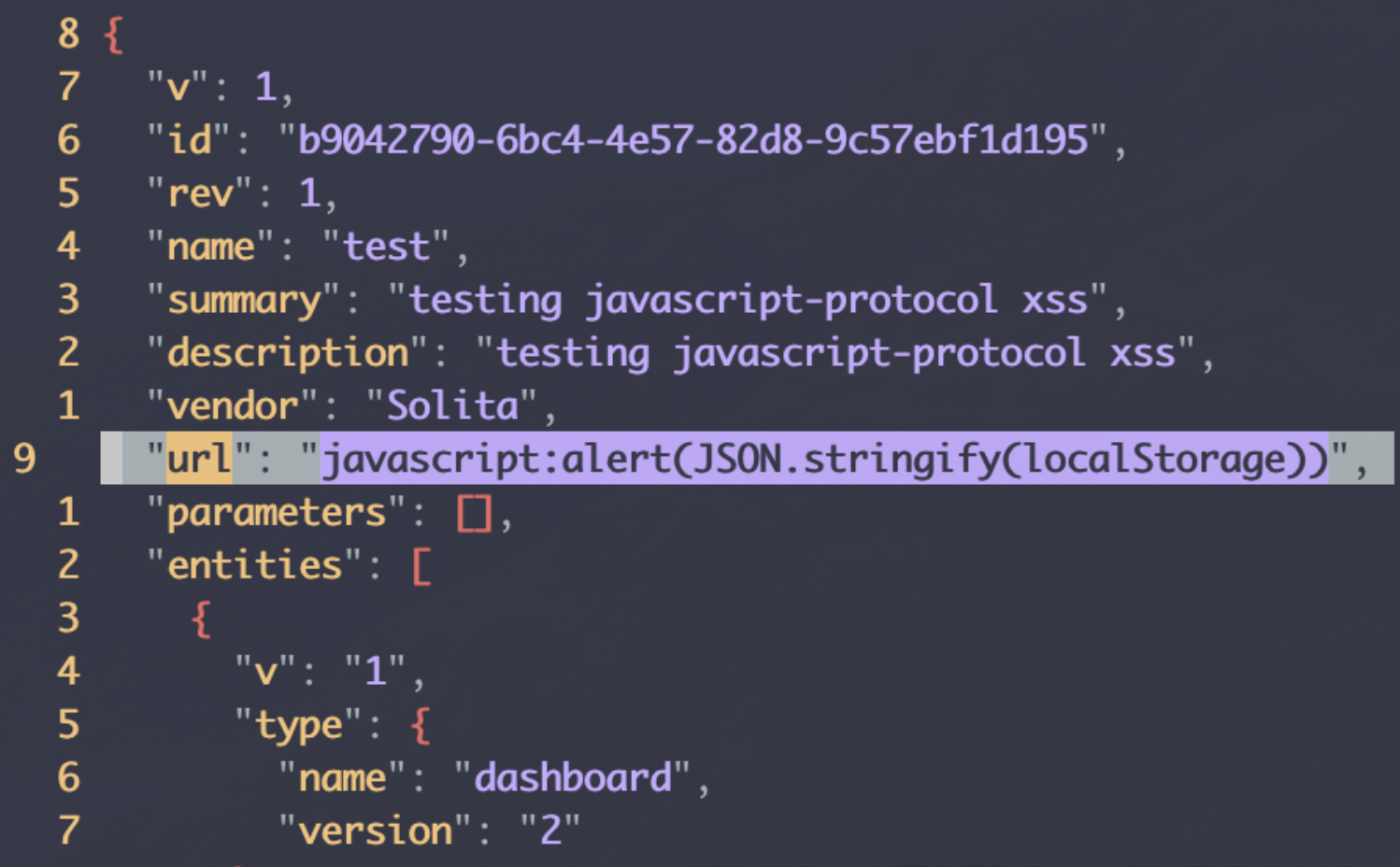 Once our malicious content pack was imported in the system we got a beautiful (and not suspicious at all) link in the UI that executed our JavaScript payload once clicked.

05.05.2020 – The vulnerabilities were found and reported to Graylog security team

07.05.2020 – The vendor confirmed that the vulnerabilities are being investigated

19.05.2020 – A follow-up query was sent to the vendor and they confirmed that fixes are being worked on