Some time ago at Solita HUB event, I talked about modern cloud operation and successful cloud transformation. Experiences that our customers had told us about, served as the starting point for my presentation. I wanted to share some of those also with you.

People have often started to use the cloud with high expectations, but those expectations have not really been met. Or they have ended up in a situation where nobody has a good picture of what things have been moved to the cloud or what has been built there. So they’ve ended up in cloud service mess.

People have often started to use the cloud with high expectations, but those expectations have not really been met.

In recent years, people have talked a lot about the cloud and how to start using it. Should they move their systems there by Lift & Shift their existing resources as they are, or should they make new cloud-native applications and systems? Or should they do both?

They might have decided to make the cloud transformation with the help of their own IT department, using an existing service provider or – a bit secretly – with a software development partner. No matter what the choice is, it feels like people are out to make quick profits and they haven’t stopped to think about the big picture and how to govern all of this.

The cloud is not a data centre

Quite often I hear people say “the cloud is only somebody else’s data center”. That is exactly what it is if you don’t know how to use it properly. When we think how the systems of a traditional service provider or our own IT departments has been built, it’s no wonder that you hear statements like this.

Before, the aim was to offer servers from data center with maintenance and monitoring for operating systems. The idea was that first you specified what kind of capacity you want and how environments should be monitored. Then it was agreed how to react to possible alerts.

The architecture has been designed to be as cost-efficient as possible. In this model, efficiency has relied on virtualisation and, for instance, on the decision whether to build HA systems or not. Especially solutions with two data centers have traditionally been expensive.

When people have started to move this old operating model to the cloud, it hasn’t functioned as they had planned and hoped for. Therefore, it can be said that the true benefits of the cloud will not be gained in the traditional way.

Cloud transformation is not only about moving away from own or co-location data centers. It’s about a comprehensive change towards new operating methods.

It is very wise to build the above-mentioned HA systems in a cloud, because they won’t necessarily cost much or are build-in features. The cloud is not a data centre, and it shouldn’t be considered as one.

Of course, it’s possible to achieve savings with traditional workloads, but still, it is more important to understand that operating methods have to change. Old methods are not enough, and traditional service partners don’t often have adequate skills to develop environments using modern means. 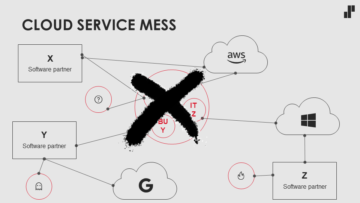 In some cases, services are built in to cloud together with a software development partner. They have promised to create a well-functioning system quickly. And this can be the case in the cloud at its best. But without management or an proper governance model, problems often occur. The number of different kind of cloud service accounts may increase, and nobody in the organisation seems to know how to manage the accounts and where costs come from.

In addition, surprisingly often people believe that cloud services do not require maintenance and that any developer is able to build a sustainable, secure and cost-effective environment. They are surprised to notice that it’s not that simple.

‘No-Ops’, and maybe the word ‘serverless’ could belong to this same category, are terms that unfortunately have been misunderstood a bit. Only a few software development partners have corrected this misunderstanding, or they haven’t realised themselves that cloud services do require maintenance in reality.

It’s true that services that function relatively well without special maintenance can be built in the cloud, but in reality, No-Ops doesn’t exist without seamless cooperation between developers and operations experts, in other words DevOps culture. No-Ops does mean extreme automation which doesn’t happen on its own. It really isn’t possible everytime, and it is not always worth pursuing.

At Solita, operation has been taken to an entirely new level. Our objective is to make us “useless” as far as daily routines are concerned. We call this modern cloud operation. With this approach, we have, for instance, managed to reduce our customers’ hourly billing considerably. We have also managed to spread our operating methods from customers’ data centers all the way to the cloud.

In my next blog, I will focus on things that should be considered in cloud transformation and explain what modern cloud operation means in practice.

Anton works as a cloud business manager at Solita. Producing IT cost-efficiently from desktops to data centers is close to his heart. When he is not working on clouds, he enjoys skiing, running, cycling, playing football. He is excited about all types of gadgets related to sports and likes to measure and track everything.